“I just don’t  understand why animals are treated this way.  I don’t get people.”

This statement was uttered months ago by Linda Wilferth, who runs Catnip Friends Rescue. We were talking in a Flemington, New Jersey pet store, in the company of the puppies and dogs, kittens and cats, she’s rescued from Southern shelters, and in the case of some her cats – right off of New Jersey’s streets. Linda wasn’t referring to any particular dog or cat or situation – just to the plight of mistreated animals at the hands of humans.

I thought of Linda’s comment after reading about the recent dog-fighting bust that spanned four states – Alabama, Georgia, Mississippi, and Texas; led to the arrest of twelve people; and the seizure of firearms, drugs, and more than $500,000 cash. It was the second largest dog-fighting bust in U.S. history. The federal raid was three years in the making.

But what now of the dogs – the 367 of them who range in age from just several days to twelve years? According to the ASPCA, the dogs “had been left to suffer in extreme heat with no visible fresh water or food. Many [were] emaciated with scars and wounds consistent with dog fighting, and some were tethered by chains and cables that were attached to cinder blocks and car tires.”

How many will be able to be rehabilitated after living such abuse-filled lives? How much fear of humans these dogs must foster in their abused bodies and souls. Yet, it will be left to humans – experts at places like the ASPCA and HSUS – to try to help these dogs overcome their fear of people, in the hope they can live out their lives with those who will treat them with the love and the respect they – and all dogs – deserve.

The puppies have the best shot at rehabilitation, as they have suffered the least, if only because of their short lives. 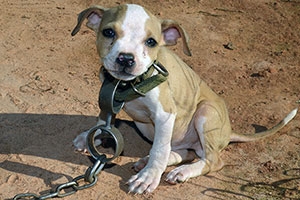 You can see more pictures of this puppy on the ASPCA’s blog, and you can read one rescuer’s firsthand account of what he witnessed at one of the properties. 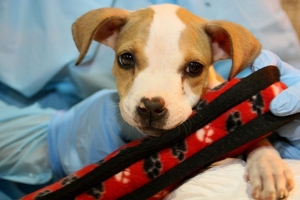 The puppy after being rescued. – ASPCA

“I just don’t  understand why animals are treated this way.  I don’t get people.”